Third visit to Ecuador. This time with a text blog as well as videos. Here is the video site EcuadorSun.com.
All pages have at least one photo. If you don't see them you may have an ad blocker on or need a cache purge. (Firefox Win)

The United flight from Quito to Houston was uneventful. We arrived in plenty of time and worked our way quickly through to the waiting area. Of course they take all liquids away from you so once you get in you are forced to pay $2.50 for a bottle of water again. Ahh, security. But at least there was wifi.
They started out by passing out the US entry declaration forms. Don't even bother looking at it if you are going to Canada. The United ap showed this information about our flight although the direction was backwards. 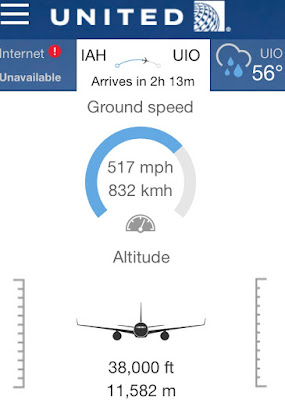 When arriving in Houston they ignore the immigration paper and make you fill in the information on a touch screen. It even takes your picture that likely goes into a database somewhere. Then you progress further where you are allowed some kind of access to the US.
Then you proceed to I pick up your luggage unless it is checked through to a later airport. We were continuing with United so just after entry we veered right and went up an escalator to the reentry inspection and scanning. Now if you would like to have your lower half rubbed securely by a burly person wearing a uniform, just leave a Kleenex or your passport in your pocket. Kaboom you have been selected.

After passing through we needed to ride the train to move to a different area of the airport where our gate was located. But the wireless at this end was broken or useless. Nothing. Further down the hall was a Wendy's restaurant and that internet worked for a while before it shut off too.

The flight from Houston to Calgary left on time. We were told we were going to arrive about 20 minutes ahead of schedule. Food consisted of one thin cookie with a waffle texture. Any further food required a purchase by credit card.

Check in at the Calgary airport was very quick as we were nearly the only flight. I had some leftover jam that I brought home and that meant that I had to check that I was importing something from a long list of restricted items. But that only meant an extra couple of minutes in another lineup to explain why I had checked that column. All the bags arrived without any inspection problems. Our ride home arrived soon after and we were off on the hour drive home.
No comments:

To watch videos that I shot on my three trips to Ecuador you can click to go to EcuadorSun.com. You can also view some of the videos on my YouTube account.